Catching a wave with my dad on father's day last year

Somewhere in my parents' loft there is a photo of me and my dad on Putsborough, either side of his brand new longboard. I'm maybe 14 or 15 years old, and I can remember exactly what I was thinking as the photo was taken. Despite growing up in landlocked Oxford before the advent of the internet, with very little exposure to mainstream surf culture, I was thinking 'wahine' as I draped myself down the side of the board. When we got the photos back from the lab and my dad saw my uncharacteristic and awkward pose, he told me off, saying 'why do you want to look like that, [springing into a semi-crouch] you should be like this, ready for action!'.

My dad never wanted a son (in fact he wanted four daughters, but fortunately for me, the eldest, he stopped after two), he brought me up to be a surfer, not a surf chick. He always encouraged me to push myself and keep up with him; when the waves were too big for me to join him out back on my surfboard he sent me out on my bodyboard instead so I could get out and get used to bigger surf. Not liking the cold was never really an option, I was under the impression that we didn't get surf in the summer for years because all our trips were in the colder months when the surf was better.

That photo taught me a valuable lesson about what I should aspire to as a surfer, that being a female surfer didn't mean I had to look or act a certain way, I just had to love surfing. So today I'm saying thank you to my dad for making me the surfer I am today - I didn't need female surfer role models when I was growing up, because with him everyone was equal in the surf. 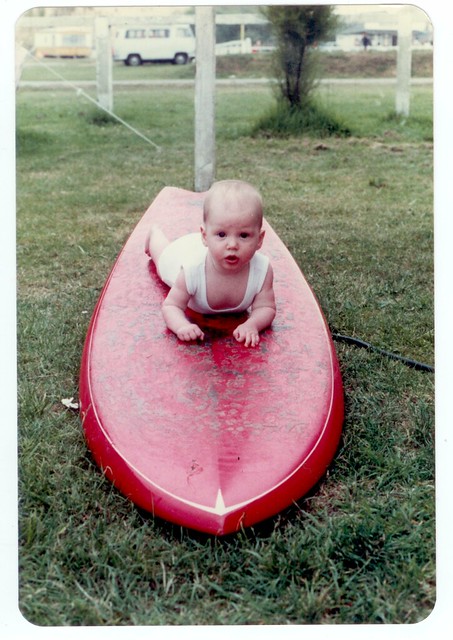 Getting me started early, Croyde Bay 1981
Posted by Rebecca Pepperell at 22:37