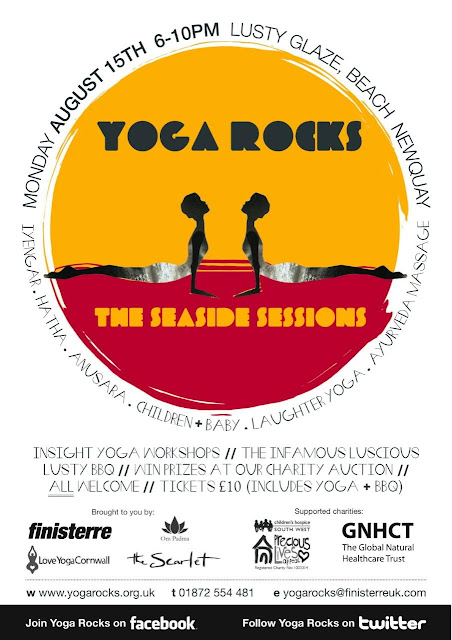 Fancy getting bendy on the beach with a BBQ afterwards all in the name of charity? My lovely colleagues at Finisterre have helped to put together Yoga Rocks - an evening of yoga events at Lusty Glaze in Newquay in aid of several local charities. It's going to be a fun evening (laughter yoga anyone?!) so come along!

Press release:
We are putting on a charity Yoga event on Monday evening, 15th August, with the help of several very flexible friends at lusty Glaze, Newquay.We hope that the Lusty gig will be the first of our community guerilla yoga tour of Cornwall, celebrating the diversity of yoga and getting people together of all backgrounds, ages and abilities to enjoy yoga as the sun sets, with a fresh and tasty BBQ, live music set (artist to be announced) and a charity auction afterwards.

The Scarlet Hotel will also be giving Ayurvedic massages and there will be meditation and chanting workshops, as well as Yoga for surfers, children and baby yoga and laughter yoga! The event will run from 6pm til 10pm and we have marquees if the weather decides to be unfriendly. Tickets are £10 including unlimited Yoga workshops and food (meat and veggie BBQ available) All ages and abilities welcome.

The event is to raise money and awareness for 2 charities close to our hearts - The Children's Hospice South West and The Global Natural Children's Health Trust - GNCHT, an awe-inspiring charity based in Truro, for children and their parents affected by HIV and AIDS in South Africa. We have already had 100 people confirmed to come along, as well 10 yoga teachers and some top auction prizes from local businesses, including a flight over the Duchy Channel, Spezia organics, Surfgirl subscriptions, Finisterre clobber and Champagne from Bin 2 Padstow.

Posted by Rebecca Pepperell at 13:08